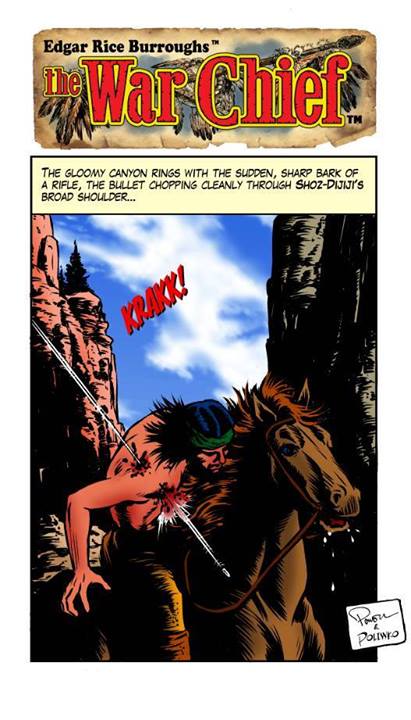 Join the adventure from Edgar Rice Burroughs, Inc.! Only $1.99 per month for ALL weekly series comic strips! Check out the free samples!

THE WAR CHIEF is a realistic historical novel about life and death on an Apache reservation during the final days of the Apache Wars. Decades before the movie Dances With Wolves, Edgar Rice Burroughs’ great respect for the West and his compassion for the exploitative treatment of the Native Americans at the hands of the pin-dah-lickoyee (white eyes) caused him to write a story that is an honest and sympathetic portrait of native life that does credit to both the Natives and Edgar Rice Burroughs.

The story revolves around Shoz-Dijiji a.k.a. Black Bear, son of Geronimo and once known as Andy MacDuff. Adopted by Geronimo as a baby, Shoz-Dijiji is Apache in everything but blood. His life gets complicated when he is influenced by his attraction to Wichita Billings, the daughter of a wealthy white rancher. 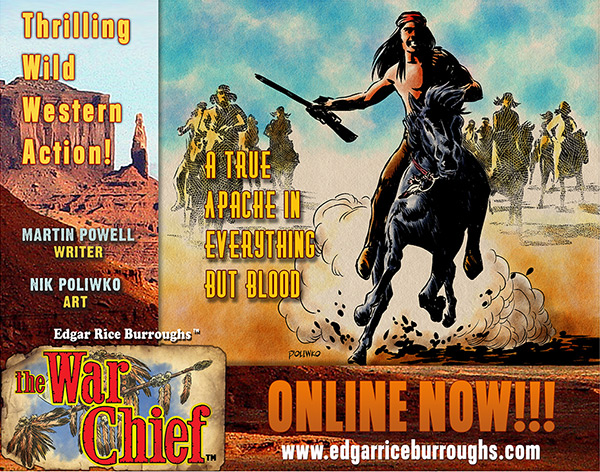 Mr. Burroughs lived among the Apaches while in the US Army in 1897 while Stationed at Fort Grant in the Arizona desert. Burroughs penned a novel in vivid, realistic detail about day-to-day life on the Apache reservation. His Novel is high-level adventure during the Old West written by one who saw it with his own eyes.

Only $1.99 a month brings this western adventure and three other online weekly strips [Tarzan, Carson of Venus and Eternal Savage] onto your screen. Don’t miss a week of it! Subscribe today!

Martin Powell, a professional writer since 1986, has written hundreds of stories in numerous genres for such Disney, Marvel, DC, and Sequential Pulp/Dark Horse Comics and others. Nominated for the prestigious Eisner Award for his work with Sherlock Holmes, he has written for some of the most popular characters in the industry, including Superman, Batman, Popeye the Sailor, Tarzan of the Apes. He is currently the author of the online weekly comic strips Carson of Venus and The Eternal Savage for Edgar Rice Burroughs, Inc. Martin has authored many children’s books, and is co-creator of the acclaimed Halloween Legion, with illustrator Diana Leto. Martin’s The Tall Tale of Paul Bunyan won the coveted Moonbeam Children’s Book Award for Best Graphic Novel of 2010.

Nik Poliwko is primarily a comic book artist and illustrator, who has also worked in computer animation and on television productions. His resume includes storyboarding for the original “Batman: The Animated Series” through Lightbox Studios in Toronto, as well as creating computer graphics for various TV series and movies, such as NBC’s “Shattered Promises.” Nik was also writer and artist of the official “Bob & Doug McKenzie” daily newspaper strip, based on the “Great White North” segment from the NBC series “SCTV”, and produced the book “Strange Brew”, a tie-in with the popular MGM cult movie “The Adventures of Bob and Doug McKenzie: Strange Brew.” In comics Nik has created material for a variety of publishers, including AC Comics, Monsterverse, Moonstone and Vortex among others, and has illustrated “Tarzan and the Native Boy” which appears in the “Jungle Tales of Tarzan” graphic novel from Sequential Pulp/Dark Horse Comics.