An all new web comic in our subscription lineup

Plotters moved toward the assassination of an old King and his grandson and heir, Michael, in a remote European Kingdom. But the old Monarch was wise and saw what was coming. Before he was killed, the King arranged for Prince Michael to be spirited away on a ship. But, there was a shipwreck and the injured Prince is swept overboard. Climbing aboard an empty lifeboat, with his memory gone, the Prince is rescued by a mad, epileptic old man piloting a tramp steamer. Also aboard – a caged lion. For years the old man kept them prisoner on his ship – beating the Prince and torturing the lion. 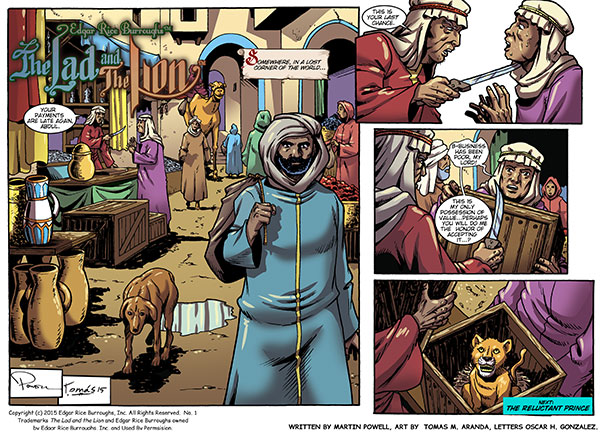 Meanwhile, on the ship, Michael befriends the lion and they eventually break free as the lion pays his tormentor back, in the ultimate way, for the years of mistreatment. Michael and the lion eventually land ashore on the Northern African coast, where they live and hunt together in the wild, at the margins of the jungle and the desert. Encountering a band of Arabs, Michael meets and falls in love with Nakhla, an Arab princess, but her father does everything he can to keep them apart. 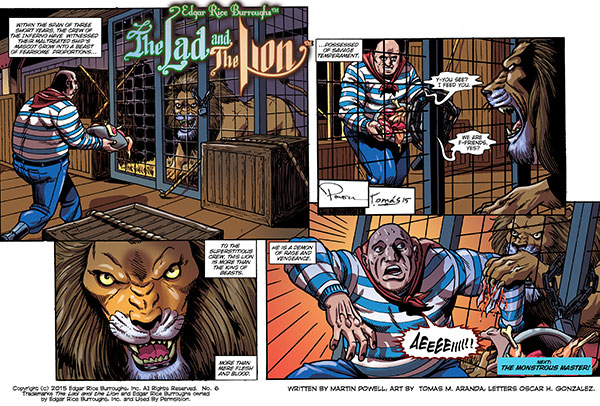 The day comes when Michael regains his memory and realizes who he is. Will he announce his survival – taking his rightful place on the throne of his Kingdom? Subscribe to our new web comic strip, and be thoroughly entertained by the twisting adventure that only Edgar Rice Burroughs can create.

THE LAD AND THE LION TEAM

Martin Powell has been a professional writer since 1986, having written hundreds of stories in numerous genres, for Disney, Marvel, DC, and Sequential Pulp/Dark Horse Comics, among others. Nominated for the prestigious Eisner Award for his work with Sherlock Holmes, he has written for some of the most popular characters in the industry, including Superman, Batman, Popeye the Sailor, and Tarzan of the Apes. He’s also the author of many children’s books and is co-creator of the acclaimed Halloween Legion, with illustrator Diana Leto. Powell’s The Tall Tale of Paul Bunyan won the coveted Moonbeam Children’s Book Award for Best Graphic Novel of 2010.

Tomas M. Aranda studied at the School of Art in Huesca, Spain in the specialty of Graphic Design. He finished his studies in Barcelona at the Comin in the Joso School. He found his passion for and dedication in the development of comics. Thomas is a teacher of Comic and Manga in Joso Comic School. He has done drawings for television pages, covers and cartoons; short stories for erotic magazines for Editorial Megamultimedia; artist for Comicon Agency, Plano International, Dude Comics; inking of Conan The Conqueror for Marvel Italy; comics on line with animation in flash for Wanadoo Comics; pencils and inks for illustrations for MTJ Publishing; several files for game characters for New Fantasy Games; concepts and storyboards for TV spots for Saatchi & Saatchi; artist in short story for anthology for “Once Upon a Time Machine” for Dark Horse Comics; and many, many more.

Oscar Humberto González Montoya was born in Colombia, South America. After graduating from a technical industrial high school he became very interested in the comic book field thanks to a few comic books from Image Comics, D.C and Marvel that he found in a small magazine store. In Oscar’s country there are no comic book stores. You may find a couple of comics here and there but they are pricey.

In 2013, he met Pablo Marcos, a renowned comic book artist, who has been a role model, a teacher and tutor in drawing and comics illustrations. Mr. Marcos has been sharing his knowledge with Oscar and Oscar in turn shows him digital coloring at Pablo’s studio. Oscar considers the encounter with Pablo Marcos the opportunity of a lifetime. He feels honored with his support. Pablo first asked Oscar to color some of his personal art then introduced him to the company Edgar Rice Burroughs, Inc. to color the series Pablo is working on today.

As with all the series featured at edgarriceburroughs.com/comics, the first four episodes will be available at no charge. Fans can gain unlimited access to the entire site and all the strips from the beginning for only $1.99 per month or $21.99 per year.