The announcement of this latest addition to the EdgarRiceBurroughs.com/comics service was made today by representatives of Edgar Rice Burroughs, Inc., the company founded by the author himself to protect and maintain his works for generations. 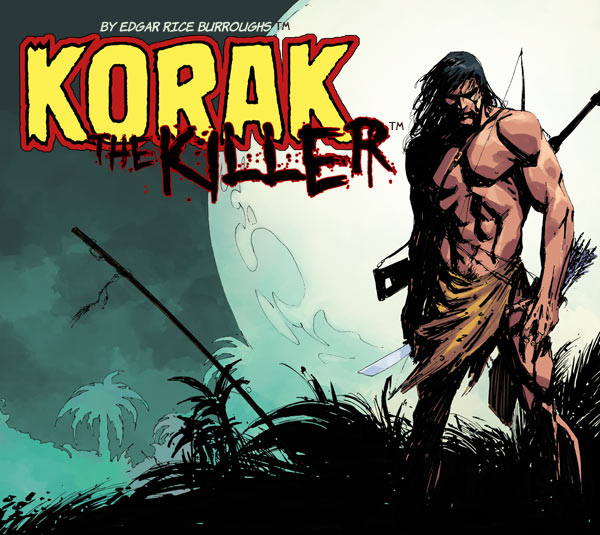 “One of the first comics I remember getting as a kid was the second issue of the Korak series from DC,” said Ron Marz, the award-winning scribe known for Silver Surfer, Green Lantern, Witchblade and, most recently, Edgar Rice Burroughs’ The Mucker web comic. “That cover of Korak fighting a huge crocodile made a lasting impression on me. I was fascinated that Tarzan had a son – and he was wholly different than the little kid I knew from the movies. I’m utterly thrilled to be able to tell new Korak stories very much in the mold of what Edgar Rice Burroughs intended for the son of his most famous creation.”

Though many of the entries in MGM’s Tarzan movie series featured an adopted son called “Boy,” the character bore only a passing resemblance to Korak, who was written by Burroughs as the natural born offspring of Tarzan and Jane.

Extremely popular among fans of the original novels, Korak frequently appeared in the panels of the now classic Tarzan newspaper comic strip, in addition to headlining comic books published at various times by Gold Key and DC. Korak the Killer represents the first time the character has been featured in his own weekly adventure strip.

Illustrator Rick Leonardi, known for his work on Spider-Man 2099, Cloak and Dagger, Nightwing and Batgirl, brings a raw, dynamic tension to the figures and composition in every panel of Korak the Killer.

Based on stories from the original novels, the first strips of the series will be available online for free at www.edgarriceburroughs.com/comics. beginning Wednesday April 9, 2014. Return weekly beginning April 19th to view additional, new Korak strips. Subsequent episodes may be enjoyed anytime, anywhere for just $1.99 a month with a subscription to the Edgar Rice Burroughs Digital Comic Strips service. Regularly updated and expertly crafted, the service currently features a variety of all-new adventure strips based on classic Burroughs creations including Tarzan, Pellucidar, The Eternal Savage, The Mucker, The Land that Time Forgot and Carson of Venus.

“A generation of fans grew up on DC’s ‘Korak’ comic, with those great interiors by Murphy Anderson and Frank Thorne, as well as amazing Joe Kubert covers. Rick and I are thrilled be to carrying on that tradition for returning fans, as well as those just discovering Korak the Killer,” added Marz.