Pellucidar Revisited: We have just completed the transition to an exciting new Artist, Gary Kwapisz. Gary brings years of experience to this strip, having previously drawn for almost every comic book publisher [see his bio below]. Our prolific Writer, Chuck Dixon, will continue to write for us. Many of our subscribers had wondered why the PELLUCIDAR comic strip hadn’t been coming out regularly. We want to thank Artist Tom Lyle for getting PELLUCIDAR up and running. Tom has scheduling conflicts that keep him from continuing the PELLUCIDAR strip. You can continue to view Tom’s original strips in our “Bonus Material” section.

When David Innes and Abner Perry build a revolutionary mining machine, their plan is to uncover vast mineral deposits far beneath the surface of the earth. But, on the “Iron Mole’s” first trip, they find themselves hurtling toward the center of the earth where death from the Earth’s molten mass of white-hot magma seems certain.

Instead, what Innes and Perry discover is that the earth’s crust is only 500 miles thick with an inner surface — and its inhabited! In Pellucidar, dinosaurs roam through jungles and saber-toothed tigers hunt mastodon and mammoth. A tiny sun, the molten core of the Earth, hangs in the center of the heavens, shedding perpetual daylight upon Pellucidar. Because the sun never sets, it is always “now” and there is no such thing as time. Stranger still, because Pellucidar rests on the inner side of the Earth’s crust, there is no horizon. The land curves upwards, as if you were standing on the inside of a gigantic bowl.

Humans dwell in Pellucidar — stone-age men and women who must fight to survive in this savage world. Even worse these humans have been made slaves of the Mahars, a race of intelligent but sinister reptiles who look upon humans as nothing more than beasts of burden or tasty snacks in one of their ghoulish ceremonies. 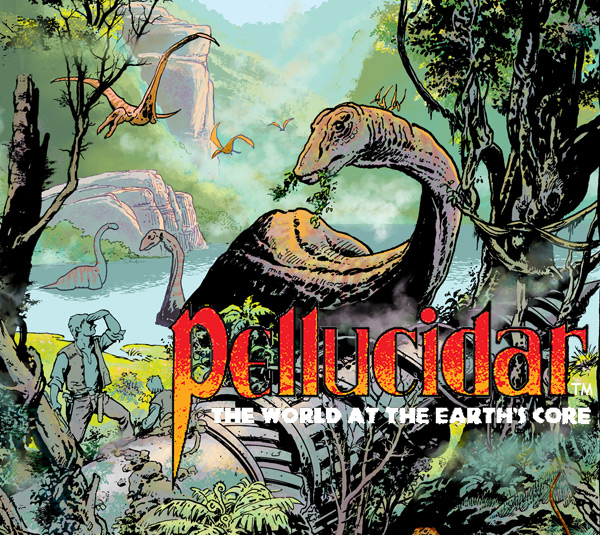 Can David Innes and Abner Perry escape capture? Can they free humanity from the Mahar tyranny? And when David meets Dian the Beautiful who becomes his one true love, what struggles must he overcome before he can claim her as his own. And together, what adventures await them on Pellucidar?

Chuck Dixon and Gary Kwapisz will continue to bring to you exciting new adventures of Pellucidar, set in the future when David and his bride, Dian the Beautiful, are parents of feisty teenagers and the Mahars, through intrigue and sabotage, make an ominous comeback. Stay tuned!

And, THERE ARE MORE TO COME. Watch for more announcements next month. Just $1.99 per month.See samples of all our comic strips at www.edgarriceburroughs.com/comics and subscribe for only $1.99 per month and enjoy our ongoing sagas. More comic strips to come!