(August 15, 2014 – Tarzana, CA) University Professor Arthur Maxon has been experimenting with the creation of artificial life—and he is afraid of what he created. If life can be created from lifeless chemicals with no assurance that anything other than mindless monsters could be created, the safest place to pursue this gruesome research is far away from upstate New York. A remote island off the coast of Borneo is the perfect place to continue his experiments. So, Maxon departs for the East Indies – taking his beautiful daughter, Virginia, with him. Adventure awaits that neither could have ever imagined! 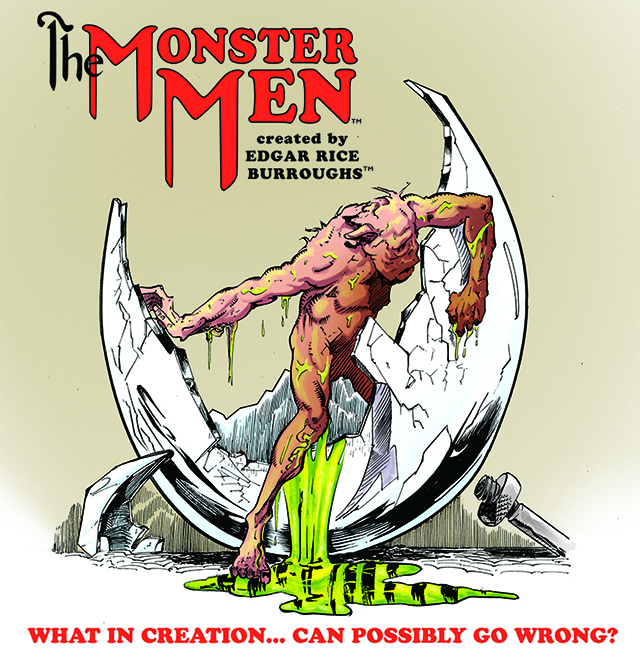 Maxon recruits Dr. Carl von Horn to be his fellow scientist and Captain of his yacht, the Ithaca. As the crew prepares for their voyage, a young man, Townsend J. Harper, Jr., becomes smitten by Virginia. Plus, unbeknownst to Maxon and Virginia, Dr. von Horn also hopes to marry Virginia.

On the island, Maxon and von Horn begin their experiments and grow several living creatures in chemical vats. They are humanoid but, mindless and ugly. Maxon hopes Experiment Number Thirteen will result in the perfect human being, and in his fanatic obsession, believes Virginia should wed his ultimate creation. But is this perfectly created human capable of feelings, or is he A Man Without a Soul?

Before that question is answered, Experiment Number One escapes and abducts Virginia. Maxon and von Horn are in pursuit, as is Number Thirteen. During their pursuit, they encounter pirates who believe Maxon has a hidden treasure – a rumor started by the ship’s crew. Evading the pirates temporarily, they stumble upon the now dead Number One, killed by Number Thirteen. And, Virginia begins to look at Number Thirteen, her rescuer, in a different light.

After dealing with pirates, kidnappings, native warriors, and the eleven ungodly horrors of escaped experiments Numbers Two to Twelve, can Maxon be convinced to abandon his obsession with artificial life? Can Virginia be sure of her emotions as she confronts madmen and dubious suitors? Only Sing Lee knows for sure, and he’s not talking…..yet! Read these exciting new comic strips, learn of their fate, and enjoy the adventures that only Edgar Rice Burroughs can create and vividly describe. 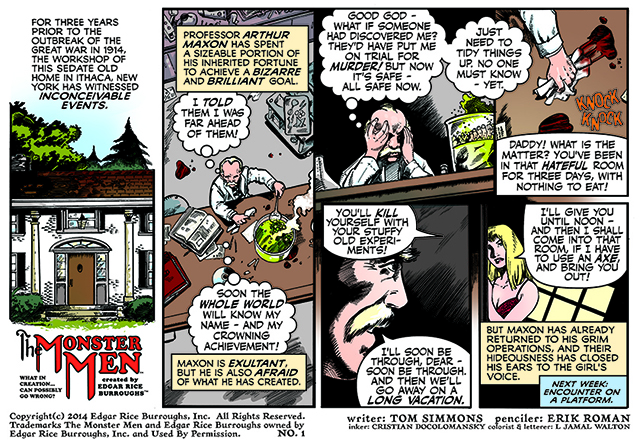 As with all the series featured at edgarriceburroughs.com/comics, the first four episodes of “The Monster Men” will be available at no charge. Fans can gain unlimited access to the entire site and all the strips from the beginning for only $1.99 per month or $21.99 per year.