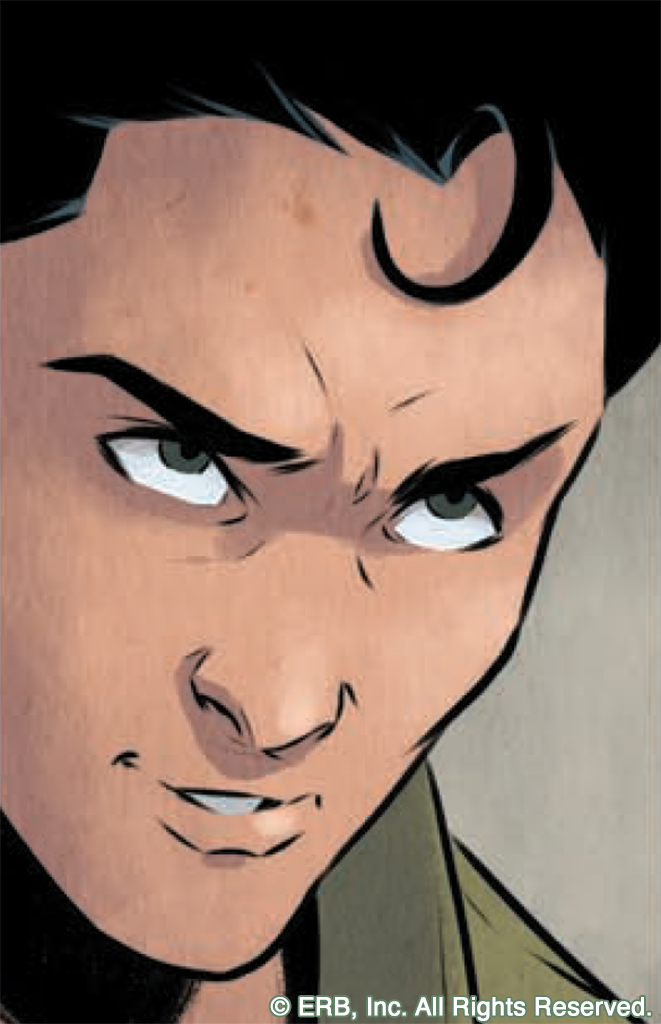 Jason Gridley is the discoverer of the Gridley Wave and the inventor of the apparatus that receives and transmits it, allowing for communication between Earth and the worlds of Pellucidar and Barsoom. At the age of twenty-three, he made contact via Gridley Wave with Pellucidar at the Earth’s core. Excited by his discovery and worried about the fate of David Innes, who lay imprisoned in a dungeon of the Korsar pirates, Jason organized an expedition to Pellucidar. He traveled first to Africa to enlist the aid of Lord Greystoke, otherwise known as Tarzan of the Apes, overseeing the construction of the world’s first vacuum airship, the O-220, with his friend Erich von Harben. After successfully testing his theory that a great north polar opening led from the outer crust to Pellucidar, Jason entered the inner world along with Tarzan aboard the O-220. When Tarzan went missing from their party, Jason took off to search for him in the airship’s scout plane, but he crashed when a giant prehistoric thipdar attacked mid-flight. His misadventures thereafter led him to meet Jana, the Red Flower of Zoram, and to face many daunting obstacles, including the humanoid lizards known as Horibs and other hostile tribes. Though Jason and Jana became star-crossed, they ultimately reconciled, realized their love for each other, and became mates. Now confident that David Innes would be found, Jason returned with Jana to the outer crust for several years, residing in Tarzana, California, with their son Janson.

In 1943, Jason and Jana decided to return to Pellucidar aboard a newly constructed vacuum airship also called the O-220, where he reunited with his goddaughter Victory Harben, the daughter of his good friends Gretchen von Harben and Nadok the Voraki. In 1950, he returned to the outer crust to seek help from Victory to restore the Gridley Wave, which had mysteriously gone silent. Together the two traveled to the dead Mahar city of Mintra, where Victory recalled having seen an ancient tablet that might help them in their task. But when the ancient Mahar queen Tu-al-sa emerged from the ruins, things took an unexpected turn. Jason and Victory found themselves caught in the mystery-shrouded machinations of the wizened old Mahar queen, who utilized their Gridley Wave apparatus to summon a strange maelstrom of energy that swallowed Victory whole. Distraught over his goddaughter’s unknown fate, Jason leaped into the swirling maelstrom only to find himself on an alien world far removed from both Victory Harben and Pellucidar…

Tarzan at the Earth’s Core

Back to the Stone Age

A Fighting Man of Mars

“Pellucidar: Dark of the Sun” (novelette) by Christopher Paul Carey

“Jason Gridley of Earth: Across the Moons of Mars” (novelette) by Geary Gravel

Follow Jason Gridley on Twitter as he sends messages to our world and time via the Gridley Wave.