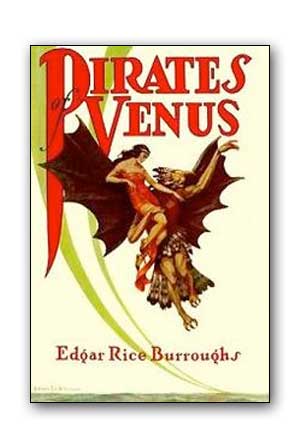 Covered by clouds and shrouded in mystery, the planet Venus was the last place Carson Napier expected touch down when he launched his secret rocket ship to Mars. But a miscalculation sent him hurtling out of control through the cloaking mists of Earth’s sister world. When Carson Napiers giant rocket crash-landed on planet Venus, he knew that there would be no return to Earth for him. His problem was to survive some how until other Earth rockets could follow. Venus was a place of unmapped oceans dotted with great islands; a world with mammoth forests whose trees pierced the clouds and whose cities squatted on their branches and winged men flew. A planet whose inhabitants included men, half-men, and monsters, all struggling with each other for dominance.

Then, captured by an ancient native civilization, Carson glimpsed a beautiful woman in a palace garden and committed a sun unpardonable by the laws of his adopted planet — He fell in love with a princess of Venus. Beneath the eternal clouds, Carson found a race of strange men inhabiting trees that made the giant red woods of California look like mere saplings. These men – and their woman – were all very handsome and healthy, for they had discovered the secret of perpetual youth and the method of avoiding all disease. But despite all their wisdom, imminent danger threatened to wipe out all the Vepajans and their lovely princess Duare.

Had Carson Napier arrived in time to save them, or was his arrival the signal for the annihilation to begin?