Tarzana, California (November 19, 2020) – In 1931, Edgar Rice Burroughs, Inc., launched its own publishing division with the release of the first hardcover edition of Tarzan the Invincible by Edgar Rice Burroughs. Today, nearly ninety years later, the company’s publishing efforts are still going strong, and are in fact more robust and ambitious than ever. As the Director of Publishing at ERB, Inc., I would like to give you an overview of where we’ve come with our book publishing over the past year, and give you a bit of a preview of where we’re headed.

I’m pleased to say that our publishing program has not only weathered the storm of the COVID epidemic, but is booming like never before. In some ways, this makes a lot of sense. In trying times, people turn to what makes them feel better and gives them hope—and what is more feel-good and inspiring than the heroes and heroines of the Edgar Rice Burroughs Universe, fighting against and overcoming the most daunting odds? And if you’re looking for a little escapism, no one does it better than ERB! 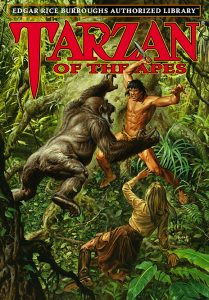 In December of last year, we released the first four volumes in the Edgar Rice Burroughs Authorized Library (Tarzan of the Apes, The Return of Tarzan, The Beasts of Tarzan, and The Son of Tarzan), followed by the next four volumes in August of this year (Tarzan and the Jewels of Opar, Jungle Tales of Tarzan, Tarzan the Untamed, and Tarzan the Terrible). Both sets of four books We are hard at work on the production of the next set of four Tarzan volumes (wait until you see those Jusko covers!), and you can expect an announcement very soon—so stay tuned and make sure to sign up for our email updates if you haven’t already!

One of the most frequent queries we get from customers about the ERB Authorized Library is “What is the publishing schedule for the Edgar Rice Burroughs Authorized Library?” We are releasing the books as swiftly as we can, which means approximately two to three sets of books will be published per year (there are currently four books in a set, although this may vary depending on the number of volumes in a given series). Right now we are in a good rhythm with our cover artist, the indefatigable Joe Jusko, so the release of two to three Authorized Library sets per year is a good estimate going forward. After the Tarzan series, we plan to move on to publishing all eleven volumes of the original Barsoom (Mars) series by Edgar Rice Burroughs, and then his other series in turn, followed by the standalone novels and collections. 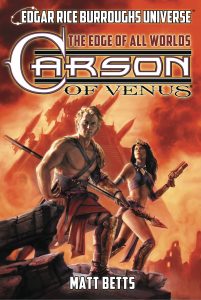 This past April, we launched the first volume of the Edgar Rice Burroughs Universe’s Swords of Eternity Super-Arc, Carson of Venus: The Edge of All Worlds by Matt Betts, followed by the release last month of Tarzan: Battle for Pellucidar by Win Scott Eckert. Both books have received fantastic and enthusiastic reviews from the fans, and they’ve been among our fastest-selling releases yet.

The Super-Arc will continue in John Carter of Mars: Gods of the Forgotten by Geary Gravel, which is slated for release in Spring 2021. I’ve already read an early draft, and let me tell you, John Carter fans, you are in for a real treat—an authentic romance of Barsoom that will transport you back to that treasured time of yore when you first cracked the spine on a Martian tale penned by the Master of Adventure himself. 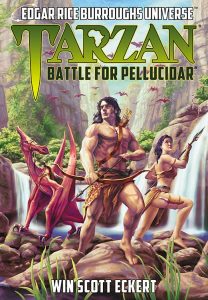 Victory Harben’s wayward adventures will continue in the bonus novelette included in the back pages of John Carter of Mars: Gods of the Forgotten, but you’ll have to wait until we announce preorders for the book to find out where in the ERB Universe she’s headed next!

Swords of Eternity will culminate in the fourth book in the cycle, Victory Harben: Fires of Halos, as told to yours truly by Ms. Harben herself. The book is releasing in…well, let’s just say 2021, since I’m just beginning to write it and I don’t want to give a misleading manuscript turnover date to the Director of Publishing. Oh wait…that’s me!

I should also add that we now have two classic ERB Universe novels back in print: Tarzan and the Valley of Gold by Fritz Leiber and Tarzan and the Dark Heart of Time by Philip José Farmer. If you haven’t picked these books up yet, you’re not going to want to miss them—especially since they are now considered ERB Universe canon and Win Scott Eckert’s Tarzan: Battle for Pellucidar makes reference to them. 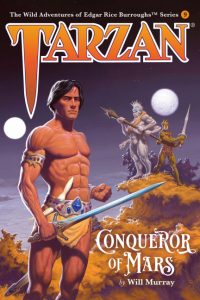 If you like to read your books on a device, make sure to check out our latest Kindle editions, including the first four volumes the ERB Authorized Library (Tarzan #5–8 are on the way), as well as Carson of Venus: The Edge of All Worlds by Matt Betts, and Tarzan: Battle for Pellucidar by Win Scott Eckert. And be sure not to miss Tarzan and the Dark Heart of Time by Hugo award winner Philip José Farmer and Tarzan, Conqueror of Mars by fan-favorite author Will Murray.

Only earlier this year, we announced that Oasis Audio would be releasing our entire catalog on audio, and they’ve already produced a whopping 12 releases, available in both CD and Audible editions! Top-notch professional narrators Ben Dooley and John McClain have provided outstanding performances as they bring the characters and worlds of Edgar Rice Burroughs to life. But don’t just take my word for it—check out the audiobook samples for yourself!

A NOTE ON SHIPPING

We strive to package and ship out your orders as quickly and safely as possible, but please note that we are a small press operating in the middle of a pandemic (COVID protocols call for limited staff and limited business hours). We prepare and ship customer orders in the order in which they are received. Since we receive hundreds of customer orders on the first day we announce a title, that may mean it takes a few business days for our shipping person to process even that first day of orders. Please know that we are working hard to get your books to you as quickly as possible, packing them safely and snuggly so they are not damaged in transit. We appreciate your patience!

Lastly, I would like to extend my personal gratitude to all the readers and fans of Edgar Rice Burroughs who have made this past year such a resounding success for our publishing program. I know that Jim, Cathy, and the whole team here at ERB, Inc., join me in these sentiments. But this is only the beginning—it’s an exciting time to be an ERB fan. There is much more adventure and excitement to come, and we look forward to bringing it to you!