Written at the close of World War I, Burroughs’ alternate history tells of a great 50-year war that finally concludes in 1967 with an Afllied victory culminating in world peace and total freedom. As the new dawn begins, Earth is learning how to put war behind her while simultaneously launching a technologically advanced space craft with a five man crew on its maiden voyage to Mars. 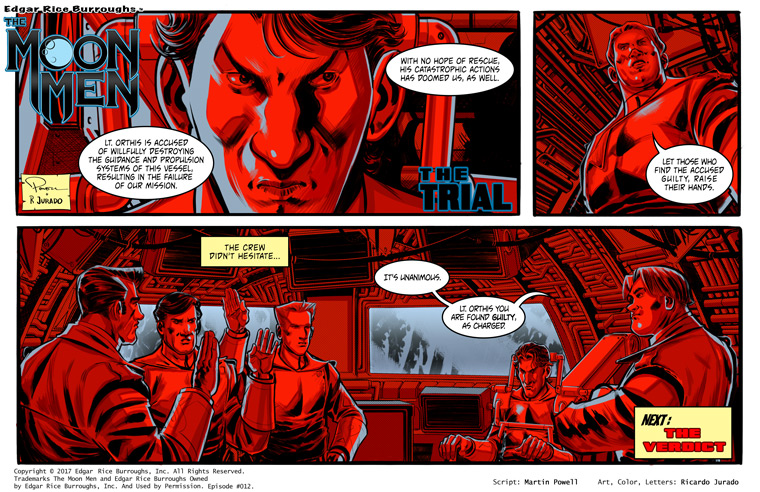 The voyage’s primary mission is to forge diplomatic relations between the civilizations of Mars (known as Barsoom by its inhabitants) and Earth. The ship’s most senior officer, Captain Julian, is forced to deal with space sickness and panic from his old flight school rival, Lt Commander Orthis, who is damaging the ship in his fear — leading to Orthis being put in irons. Orthis, consumed with rage, sabotages the ship’s engines resulting in a forced landing on the Moon.

During the descent, the spaceship is caught in a lunar spiral that pulls the ship deep into the center of the Moon revealing an earth-like environment with plants, animals and inhabitants. Julian gives Orthis a chance of redemption — not only for Orthis’ sake but for the survival of his crew, as every man is needed. 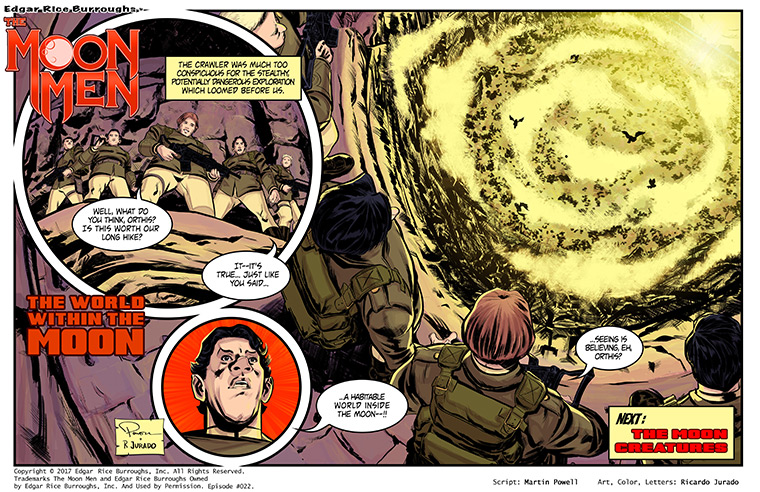 Julian and the crew explore and discover a variety of creatures and civilizations. While navigating the majestic forest-like inner moon, they meet the beautiful princess Nah-ee-lah, who captures the eye of both Julian and Orthis. Will Julian’s moral instincts prevail when faced with Orthis’ selfish desires?

The Earthmen soon encounter the warlike civilization of the Kalkars — human-like creatures whose thirst for power will capture the diabolical passions of Orthis. Together, Orthis and the Kalkars turn their desires toward Earth, launching an invasion and 400-year occupation, pitting future generations of Julian’s and Orthis’ descendants in the ultimate struggle of human freedom versus totalitarian rule — an underlying theme in many of Burroughs’ adventures.

See our exciting new web comic strip for the whole story. Written by our prolific writer, Martin Powell, and with beautiful illustrations from Ricardo Jurado — you are in for an exciting read.

Ricardo Jurado is an artist based in Sabadell, a city near to Barcelona, with over seventeen years of experience dedicated to animation, illustration and comics — although during the past eight years he’s been mostly focused on gaming and videogames. Ricardo has participated in a couple of anthologies such as Once Upon a Time Machine published by Darkhorse Comics and Visions of the End (Visiones del Fin in its original) published by Aleta Ediciones in Spain.