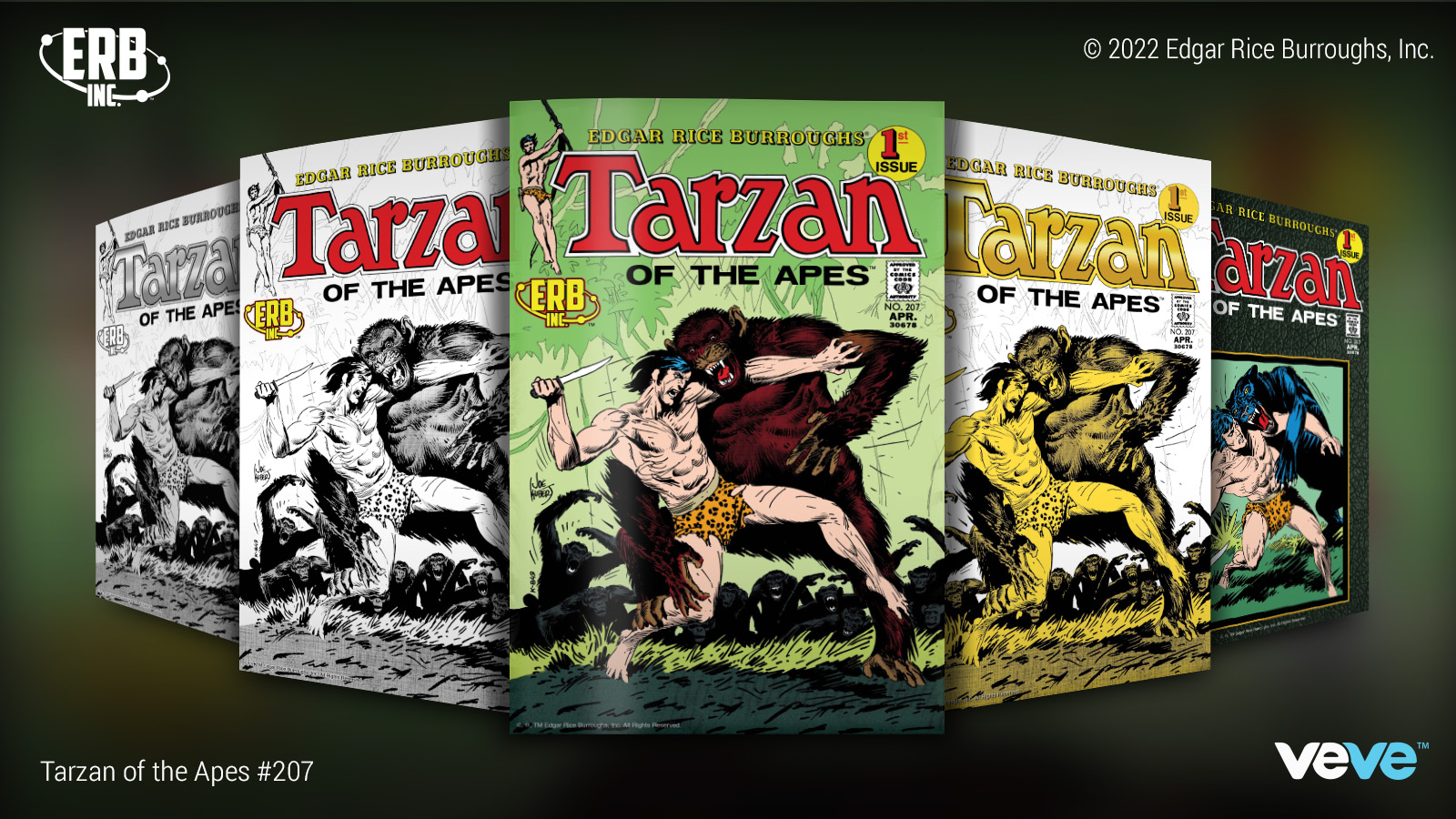 AUCKLAND, New Zealand, June 1, 2022 – VeVe, the largest mobile-first digital collectibles platform, has announced a new partnership with Edgar Rice Burroughs, Inc., the company that manages the worldwide rights to the iconic character Tarzan®, to bring the legendary Tarzan of the Apes™ comic books to the platform.

Tarzan is one of the most recognizable characters in popular culture and a worldwide phenomenon since his creation by Edgar Rice Burroughs, one of the best-selling authors of the twentieth century. Comic books starring the heroic Lord of the Jungle® have been consistently in print for nearly a century, written and illustrated by some of the most renowned and beloved creators past and present. In the initial drop, collectors can purchase one of the most celebrated Tarzan comic books exclusively through the VeVe app (available to download on the App Store and Google Play) on Friday, June 3 at 8 AM PST.

This initial drop of Tarzan collectibles commemorates the classic issue #207 of the long-running Tarzan of the Apes comic book series featuring the story “Origin of the Ape-Man,” written and illustrated by comics legend Joe Kubert. First published 50 years ago, issue #207 was the first time Kubert brought his creative talents to the Lord of the Jungle, depicting him as no one ever had before in his raw, gritty, and action-packed style, defining a new look for the ape-man for an entire generation of fans that still resonates in our imaginations today. In 1976, Joe Kubert founded The Joe Kubert School of Cartoon and Graphic Art. The school taught students the craft of sequential comic book art and still thrives today as The Kubert School. This historical release includes a main cover highlighting one of Kubert’s best-known illustrations of all time plus four additional covers: Variant Cover Design, Black and White, Gold, and Platinum.

“Tarzan has proven to be a timeless character, maintaining his perennial qualities of strength, courage, protector of wildlife and the environment, and defender of those in need, even as he adapts to the changing world,”  said Jim Sullos, President of Edgar Rice Burroughs, Inc. “Every generation has its Tarzan, and its own way of experiencing the ape-man’s adventures, and this generation is no different. We are extremely proud and excited to partner with Veve to bring Tarzan into the new frontier of digital collectibles, where we are certain the Lord of the Jungle will once again triumph.”

“Tarzan is one of pop culture’s most enduring characters and we’re thrilled to bring him and this iconic comic series into the digital world,” said David Yu, Co-Founder of VeVe. “We believe Veve is a wonderful way to celebrate the 50th anniversary of this comic as well as Tarzan’s and Joe Kubert’s ongoing legacy for fans to cherish forever.”

Through the VeVe platform, fans can showcase their digital collections in the app’s virtual showrooms as epic 3D dioramas, as well as virtually visit, comment on and like showrooms from other collectors. VeVe also offers an augmented reality (AR) photo mode that allows  collectors to interact with every digital collectible in 3D, as well as share their collectibles through VeVe’s in-app social feed or on external social platforms. In addition, VeVe uses Ethereum’s layer 2 scaling protocol, Immutable X, providing a 99.9% reduction in environmental footprint.

To learn more about the VeVe app, please visit the official website here.

Founded in 2018, VeVe was created by collectors, for collectors to bring premium licensed NFT digital collectibles to the mass market. With over 2.6 million active users and over 4 million NFTs sold, VeVe is the largest mobile-first digital collectibles platform and one of the top grossing Entertainment Apps in the Google Play and Apple stores.

Utilizing both blockchain and augmented reality technologies, VeVe offers premium licensed collectibles from leading brands including DC Comics and Warner Bros, Cartoon Network, tokidoki, Ghostbusters, Back to the Future and more. For the first time, these brands can provide customization to collectibles after their initial sale, creating endless revenue possibilities for products both new and previously offered. In addition, VeVe’s 3D augmented reality photo mode allows collectors to interact with every digital collectible, as well as share their collectibles through VeVe’s in-app social feed, or on external social platforms including Twitter, Instagram, TikTok and more.

The VeVe Digital Collectible app is available on both iOS and Android.

From its headquarters in Tarzana, California, Edgar Rice Burroughs, Inc., administers the intellectual property of American author Edgar Rice Burroughs (1875–1950), one of the twentieth century’s most prolific and enduring writers. Mr. Burroughs’ 80+ novels and 40+ short stories have been adapted into 60 films and 250 television episodes, and are featured in comic books, video games, apparel, and other merchandise. Through worldwide ownership of copyrights and trademarks, Edgar Rice Burroughs, Inc., oversees authorized adaptations of his literary works in film, television, radio, publishing, theatrical stage productions, licensing, and merchandising. The company, which licenses the copyrights and trademarks of Mr. Burroughs’ fictional heroes, including Tarzan of the Apes™, John Carter of Mars®, Carson of Venus®, and many more, is owned by his heirs and operates from offices the author built in 1927 on the site of his former Tarzana ranch in the San Fernando Valley.