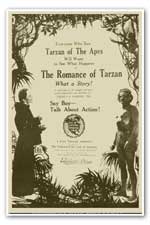 The Romance of Tarzan

The film opens with flashbacks from Tarzan of the Apes to establish the back story. The African expedition led by Professor Porter (Thomas Jefferson) to find Tarzan (Elmo Lincoln), the ape-raised heir of Lord Greystoke, has been crowned with success, and Tarzan and Porter’s daughter Jane (Enid Markey) are in love. The party now prepares to return to civilization when it is attacked by natives and separated from the ape-man. Tarzan’s cousin Clayton (Colin Kenny), the current Lord Greystoke, desiring to keep his wealth and title, reports having seen the savages kill Tarzan. Believing him dead, they leave without their charge. But Tarzan has in fact survived, and is eager to be reunited with Jane. Finding his new friends gone he swims out to another boat to follow. Eventually he reaches California in the United States of America, and is landed near the Porters’ San Francisco ranch. Tarzan in civilization is like a bull in a china shop, as is demonstrated early in a destructive incident in a dance hall, where his prowess impresses La Belle Odine (Cleo Madison). Things get back on track when Jane is kidnapped by outlaws, presenting him with the opportunity to rescue her. Jane, however, is cold to him, as Clayton has falsely convinced her he is in love with the other woman. Heartbroken, Tarzan swears off civilization and returns to Africa. Belatedly learning the truth from Odine, Jane follows, and is happily reunited with her lover in the jungle.