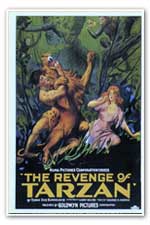 The Revenge of Tarzan

Tarzan and Jane are traveling to Paris to help his old friend Countess de Coude, who is being threatened by her brother, Nikolas Rokoff. Rokoff has Tarzan tossed overboard. He survives, comes ashore in North Africa, and goes to Paris to search for Jane.

In Paris, Tarzan reunites with his old friend Paul D’Arnot, who informs him that Jane was taken to Africa.

Tarzan returns just in time to save Jane from a lion attack, and soon defeats Rokoff and his henchmen.