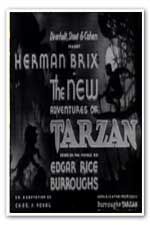 The New Adventures of Tarzan

Several plot elements bring the characters together in search (and pursuit) of the Guatemalan idol known as The Green Goddess: Tarzan’s friend D’Arnot has crash landed in the region and is in the hands of a lost tribe of jungle natives. Major Martling is leading an expedition to find the fabled artefact for a powerful explosives formula hidden within it. Ula Vale’s fiancÃ© died in an earlier expedition to rescue the artefact for its archaeological benefit and so she starts one of her own in his honour. Raglan has been sent by Hiram Powers, Ula’s lawyer, to steal the valuable idol for himself – in addition to containing the explosives formula, it also holds a fortune in jewels.Tarzan, Ula and Major Martling find the idol and rescue D’Arnot from the natives that worship it in the 70-minute-long first episode. However, Raglan escapes with the Green Goddess and heads through the jungle for the coast. Tarzan and the others pursue him across the jungle, encountering many perils, including recapture by the natives to whom the idol belonged. The adventures end out at sea where, during a hurricane, they are able to permanently secure the idol while Raglan is killed by another of Powers’ agents because of his failures. The murderer perishes when the ship sinks. Returning to Greystoke Manor in England with Tarzan, Ula consigns the explosives formula to fire in the final episode, where she and Tarzan also recount several adventures from the first part of the serial to an assembled party of friends and colleagues.