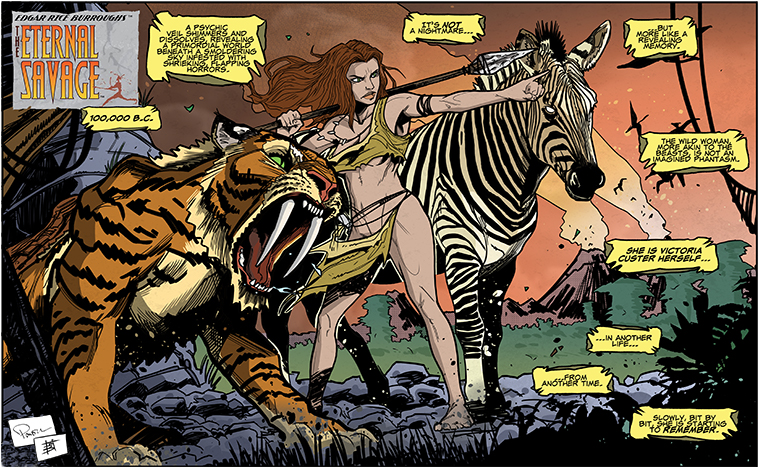 In 1939 A.D. London, England, Victoria Custer – niece and namesake of her aunt, also Victoria Custer – has dreams upon dreams that place her in 100,000 B.C. Africa. What is causing these dreams that hound her each night with an intensity that sometimes stays with her and causes her to faint during the day? The answer may lie in Africa where a medical doctor, doubling as a witch doctor, hypnotizes Victoria in an attempt to discover the truth behind these dreams.

Journey with us as we return to The Eternal Savage with the Edgar Rice Burroughs, Inc. pioneering web comic strip program. You will be rewarded with an exciting return to 100,000 B.C. Africa – a very dangerous place, indeed! 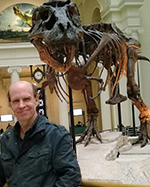 Martin Powell has written hundreds of stories in numerous genres for Disney, Marvel, DC, Dark Horse, and Capstone Books, among others. Nominated for the prestigious Eisner Award for his work with Sherlock Holmes, he has written many of the most popular characters in the industry, including Superman, Batman, Popeye the Sailor, Dracula, Frankenstein, and Tarzan of the Apes. Currently, as the author of almost a dozen different ERB online comic strips, and the critically acclaimed Jungle Tales of Tarzan graphic novel from Dark Horse, Powell has written more Edgar Rice Burroughs characters than any other contemporary writer.  He received the coveted Golden Lion Award from the Burroughs Bibliophiles in 2017 for his on-going contributions to the legacy of Edgar Rice Burroughs. 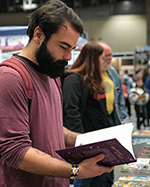 Toni is a comic book artist and illustrator from Minorca, Spain. He studied three years of Fine Arts at University of Barcelona. He started at Escola Joso Comic School in Barcelona, in 2015, where he took part of the sci-fi fanzine Deadline and Deckard, among other projects.

Currently, Toni is working as a freelancer for publisher Edgar Rice Burroughs Inc. He worked as a full-time artist for The War Chief Comic Strips #114-232. In addition, he takes on commission work for Idées Plus (France), and Dynamite Entertainment, as well as further enquiries as an illustrator and graphic designer.