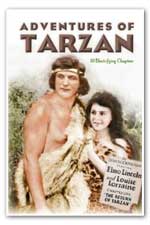 The Adventures of Tarzan

Tarzan rescues Jane from Arab slave-traders after they have been marooned in Africa. They return to the cabin where his parents lived before their death. Jane is captured by Queen La of Opar, taken to that hidden city, and is to be made a sacrifice. Tarzan rescues her and they escape. Nikolas Rokoff and William Cecil Clayton, the usurper to Tarzan’s title of Lord Greystoke, learn that Jane has a map to the city (which contains fabulous riches in exotic jewels), tattooed onto her back. They kidnap her and attempt to loot the city. Tarzan braves many perils, finally rescues Jane, defeats the villains and escapes La’s amorous clutches.