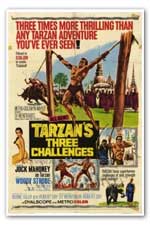 Tarzan is summoned to an unnamed Asian country to protect Kashi (Ricky Der), the youthful heir to the throne, from his evil uncle, Khan, played by Tarzan veteran Woody Strode. In the course of the film Tarzan must compete against Khan in three tests of strength.

First is an archery contest. Then Tarzan stands between two tall posts, grasps handles which are attached to two ropes which run over the top of each post and are attached to buffalo. When the buffalo are driven apart, Tarzan is lifted into the air and stretched. He passes the test by not letting go of either handle. Third, he and Khan are asked to answer a question designed to test their wisdom. When Tarzan triumphs all three times, he and Khan undergo a fourth challenge.

Tarzan kills Khan when they face each other with sabers on a net suspended above vats of boiling oil.