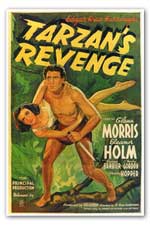 Eleanor Reed accompanies her parents, Roger and Penny, and Nevil Potter, her fiance, on an expedition to Africa to capture wild animals to sell to a zoo. Ben Alleu Bey spots Eleanor and wishes her to become the one hundredth wife in his harem. When she refuses, he follows their safari.

Both groups are followed closely by Tarzan, who releases the animals and woos Eleanor away from both Nevin and Bey. When Nevin discovers that Eleanor plans to remain behind with Tarzan, he attempts to kill him, but only grazes his shoulder with a round fired at close range. Tarzan attacks Nevin, but releases him at Eleanor’s behest. As the Reeds’ ship sails down the river, Tarzan and Eleanor go for a swim.