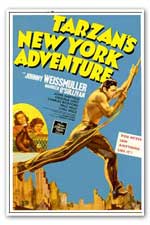 Circus workers land an airplane in the jungles of Africa in search of lions for their show. While trapping lions, the three men meet up with Tarzan, Jane and their adopted son Boy. Watching Boy’s tricks with the elephants, the head of the circus, Buck Rand (played by Charles Bickford), realizes that Boy would be a great act for the circus. The group is attacked by natives, and it appears that Tarzan and Jane have perished in a jungle fire. The men take Boy on a plane back to the United States. Tarzan’s loyal chimp Cheeta wakes Tarzan and Jane before they are burned by the fire. Then Cheeta tells Tarzan that Boy has left with the men on the plane.

Tarzan, Jane and the chimp track across the jungle and eventually end up in New York City where Tarzan is befuddled by the lifestyle and gadgetry of “civilization”. Tarzan displays his quaint, “noble savage” ways by complaining about the necessity of wearing clothing, commenting that an opera singer that he hears on a “noisy box” is “Woman sick! Scream for witch doctor!”, and expressing his childlike wonderment at taxi cabs. It is noteworthy that Tarzan comments that various African-Americans he sees making a living throughout New York City are from this or that tribe back in their jungle home.

Tarzan and Jane attempt to get Boy back first by legal means. This leads to a moving sequence where the judge asks Tarzan what the fishing is like back in Africa and what he considers to be important things that he needs to teach his adopted son. Unfortunately, the circus retains an unscrupulous lawyer who tricks Jane into admitting that Boy was not born in the jungle and is not her actual child and provokes Tarzan into attacking him in the court room. Tarzan makes a daring escape out the courtroom windows and after a rooftop chase by the police ends up doing a high dive off the Brooklyn Bridge into the East River.

Tarzan somehow finds the circus where Boy is being held and enlists the aid of circus elephants who are chained to stakes. He calls to them with his “jungle speak” and they take their revenge on their tormentors by tearing free from the chains and destroying the circus. In the ensuing bedlam, Tarzan is able to rescue Boy, and in the film’s conclusion the judge grants Tarzan and Jane full custody of Boy before the family returns to Africa.