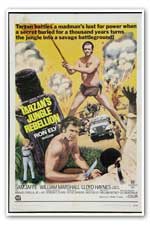 Dr. Singleton, an archeologist, and his daughter Mary travel to Africa to search for an ancient artifact called The Blue Stone of Heaven. The legend is that this stone has the power to endow whoever stands to the right of it with godlike powers. Tarzan agrees to help Dr. Singleton and his daughter find the stone near the ancient pyramids. Once it is uncovered Colonel Tatakombi driven by the idea of being powerful uses the large blue statue to start a rebellion among the natives. He turns the natives against Tarzan and Tarzan is imprisoned but Mary, who has fallen in love with Tarzan, comes to his rescue with the help of Jai.