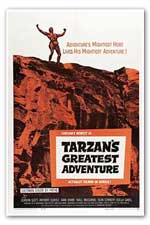 A native village is robbed, supposedly by natives. Before a man dies, he mentions the name “Slade”. Black colouring is found on his hand so they know it is white people who did it, disguised as blacks. Tarzan arrives, remembering Slade from a year previously as a man who let 3 of his men die and has a grudge against him. A woman (Angie) turns up, Sanchez’ latest woman, flying one of his planes. Later she buzzes Tarzan in his canoe, and crashes the plane so now Tarzan is stuck with her as he goes after Slade. Slade has 3 men and a girlfriend with him. He knows where a diamond mine is and has got his supplies for his trip by stealing them. Tensions run high amongst his men. Kruger is an ex-Nazi and a diamond expert. O’Bannion is an Irish rebel, a drunk and a trouble maker who keeps hassling Dino till Dino decides to kill him but falls foul of a wild animal and quicksand.

Tarzan and Angie lose their canoe but take an overland short cut where he fells some trees into the water to stop Slade’s boat. Tarzan attacks them with arrows but they respond with (stolen) dynamite and Tarzan is injured. He later kills O’Bannion but collapses, needing Angie’s help. Angie is captured trying to get penicillin for Tarzan and the group continue in their boat. Tarzan recovers and follows them to the diamond mine. Toni (Slade’s girlfriend) falls into a trap meant for Tarzan. In the cave, Kruger realises that Slade is more interested in danger than diamonds and tries to kill him but is in turn killed. Slade then goes out to wait for Tarzan with his prepared weapon, a metal noose for garrotting him. There is a final fight between the two on a cliff top.