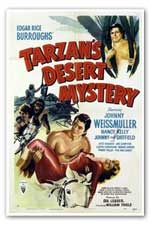 The film revolves around Tarzan’s quest, at the urging of Jane, to find a rare African serum to help Allied troops. Tarzan’s son, Boy, manages to tag along as the apeman journeys into the Sahara, and the two are soon joined by a rambunctious horse and a female American magician, played by Nancy Kelly. The story is mostly a fantasy adventureâ€”with “Arabian Nights”-style characters and sinister Nazi spiesâ€”but it also includes considerable comic relief and even science fiction elements. Critics complained that it was aimed more toward juvenile audiences than previous Tarzan films had been.