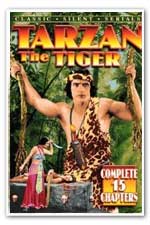 Lord Greystoke (Tarzan) returns to Africa, with Lady Jane and friend Albert Werper, in order to return to Opar. He needs the treasure of Opar in order to secure his estates in England. Werper, however, is actually interested in the gold himself. He is in league with Arab slave trader Achmet Zek who wishes revenge on Tarzan and Lady Jane for himself.