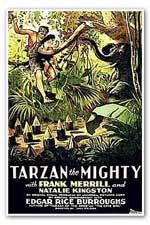 Mary and her brother, survivors of a shipwreck, are constantly harassed by Black John, a thief and cruel descendant of a pirate. Black John has taken a strong liking to Mary and wants to marry her. Tarzan has befriended Mary and protected her and her brother from Black Johnâ€™s friends who are cruel to them. As Tarzan could not read, he wasnâ€™t aware that the papers he had been keeping were very important. Mary read some of the documents only to discovered that Tarzan is sole heir to the Greystoke estate. Tarzanâ€™s uncle arrives to try to find his nephew but before he can, Black John shoots Tarzan, then hides Maryâ€™s bother and Tarzanâ€™s uncle in a cave. Black John poses as Lord Greystoke and plans to go to England with Mary as his bride.