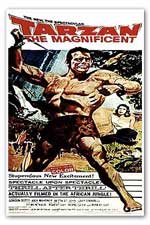 The Bantons (father, Abel and four sons, Coy, Ethan, Johnny and Martin) rob a pay office in a settlement, killing some people. Coy Banton is tracked down to their camp and taken away by policeman, Wyntors. Taking him back to town, Wyntors is killed as two of the brothers seek to rescue Coy. Tarzan appears and kills Ethan Banton. The other brother escapes. Tarzan decides to take Coy to Kairobi for the $5000 reward so he can give it to Wyntors’ widow. However, no one in the town of Mantu (same town as beginning of Tarzan’s Greatest Adventure) wants to help him. The boat he is waiting for to take him and his prisoner to Kairobi is ambushed by the Bantons who send the passengers off and destroy the boat.

Tarzan decides on an overland trek and agrees to take along the boat passengers and the boat’s mate, Tate. The presence of so many people to watch out for hinders Tarzan. The Bantons threaten to kill anyone who helps Tarzan. Pausing only to shoot the doctor who has told them what they want to know, the Bantons set out after the party and Coy.

Ames is a boastful windbag whose wife begins to detest him. Seeing this, Coy plays up to her, knowing he might be able to use her later. The party are captured by natives and the leader wants to kill Coy who killed his brother when the Bantons raided their village. However, the chief’s wife is having a difficult childbirth labour, and since Conway (who was a doctor) is able to help her have her baby (a breach birth), the chief agrees to let the party go.

Coy sees his chance and escapes. Thanks to Ames, Tate is shot and later dies. Tarzan captures Coy and he hides them both in a quicksand pit as the other Bantons search for them. Later, Lori wanders off and is caught by Johnny Banton. As she screams, Tarzan comes on them and after a fight, Johnny dies with an arrow in him. Later, seeing his grave (along with Tate’s) Martin Banton has had enough of a father who taught them to steal and murder by age sixteen and leaves him.

Coy’s wiles have paid off and Fay Ames releases him while the others sleep, and they leave camp together. Tarzan goes after them and finds Fay’s scarf. Coy left her behind when she was out of breath and a lioness found her. Tarzan eventually comes on Coy and Abel Banton, and in a roving battle, a ricochet from Coy’s rifle kills Abel. A prolonged battle on rocks, on sand and underwater follows before Tarzan finally knocks Coy out. The film ends with Tarzan and the remaining three people handing Coy over to the Kairobi police on the border and telling them to make sure Wyntor’s widow gets the reward money.