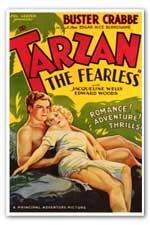 Tarzan rescues Dr. Brooks, an elderly scientist, who is held by the followers of Zar, God of the Emerald Fingers, in their lost city. Mary Brooks, his daughter, and Bob Hall have also been searching for him, led by villainous safari guides, Jeff Herbert and Nick Moran.

Tarzan goes in search of Mary, and soon all are captured by the people of Zar and brought before Eltar, their high priest. Jeff and Nick are killed, but the others are free to go, provided they never return.

Mary and her father decide to stay with Tarzan instead of returning to civilization with Bob Hall.