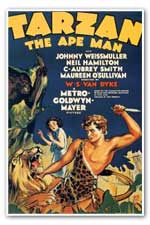 James Parker (C. Aubrey Smith) and Harry Holt (Neil Hamilton), in Africa on a quest for the legendary elephant burial grounds (and their ivory), are joined by Parker’s daughter Jane (Maureen O’Sullivan). Holt, attracted to her, tries somewhat ineffectively to protect her from the jungle’s dangers, notably failing to prevent her abduction by the jungle’s guardian, the mysterious Tarzan (Johnny Weissmuller) and his ape allies. The experience is terrifying to Jane, yet she finds herself missing the ape man after she is returned to her father. When the expedition is captured by a tribe of, what Jane’s father calls “dwarfs”, she sends Tarzan’s ape friend Cheeta (Jiggs) for help, bringing Tarzan to the rescue. In the end, she elects to stay in the jungle with Tarzan.