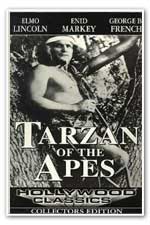 John and Alice Clayton, Lord and Lady Greystoke (True Boardman and Kathleen Kirkham), are passengers on the Fuwalda, a ship bound for Africa. When the vessel is taken over by mutineers the sailor Binns (George B. French) saves them from being murdered, but they are marooned on the tropical coast. After their deaths their infant son is adopted by Kala, an ape, who raises him as her own. The young Tarzan (Gordon Griffith) grows to maturity among the apes, becoming their king. Binns, returning to find the Claytons after ten yearsâ€™ captivity among the Arabs, discovers the ape man and travels to England to report his survival to his family. An expedition led by scientist Professor Porter (Thomas Jefferson), a scientist, is launched to investigate. Meanwhile, Kala has been killed by a native, who is killed in turn by the now-adult Tarzan (Elmo Lincoln). The villagers kidnap Porterâ€™s daughter Jane (Enid Markey); Tarzan rescues and romances her, and she comes to accept his love.