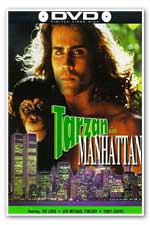 Tarzan leaves Africa and goes to present-day New York City to seek vengeance for the murder of his Ape mother Kala, and to rescue Cheeta who was taken by hunters working for the Brightmore Foundation. Soon Tarzan discovers this supposed philanthropic organization is conducting illegal tests on animal brains in an effort to transfer the thoughts and knowledge of one creature to another, and he sets out to rescue the animals and expose Brightmore. He is aided by Jane Porter (a cab driver, played by Kim Crosby) and her father, Archimedes “Archie” Porter (Tony Curtis), a retired police officer, now the head of his own security agency.

With Brightmore’s operations shut down, Jane joins her father’s security agency, and both talk Tarzan into coming onboard at minimum wage, but with all the bananas Cheeta can eat.