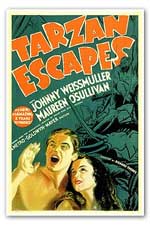 Jane’s two cousins Eric and Rita arrive in Africa to tell Jane about a fortune left to her back in their world and to try and convince her to return with them. They are led to Tarzan’s escarpment home by Captain Fry (John Buckler), a hunter with an agenda of his own. Jane convinces Tarzan to let her go back with Eric and Rita, promising that their separation will only be temporary, but Captain Fry (unknown to the others) attempts to capture Tarzan to take him back civilization so he can be put on public display and actually succeeds in caging Tarzan. Fry’s treachery includes making a deal with an unfriendly native tribe to give him food, canoes and protection for the journey back in exchange for his handing over Jane, Eric and Rita for “ju-ju” and taking away the greatest “ju-ju” – Tarzan. Fry’s plan goes wrong when the natives capture Tarzan in his cage and all four white people are taken prisoner. Tarzan manages to escape with the help of elephants and Cheeta and guides what’s left of Fry’s party through a cave passage filled with treacherous quicksands. Just before they exit the caves to safety, Tarzan forces Fry to go back the way they came as punishment for his betrayal. Fry starts to go back, then seizes a heavy branch to attack Tarzan, but before he can exit the cave he falls into a quicksand bog and is swallowed up. Rita and Eric tell Jane that it is not necessary for her to return with them and that she belongs with Tarzan. The film ends with Tarzan and Jane reunited at their treehouse.