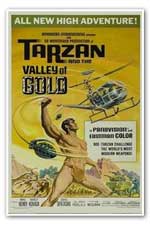 Tarzan and the Valley of Gold

Augustus Vinero, a wealthy international criminal, known for his habit of sending explosive wristwatches to those not in his favor, kidnaps Ramel, a small boy who may know the location of the fabled Valley of Gold in Mexico.

Tarzan is called in by an old friend to track the kidnappers and rescue the boy. Along the way, he rescues Sophia Renault.

The finale involves Tarzan battling Vinero’s hulking hennchman, Mr. Train, and a showdown with a helicopter.