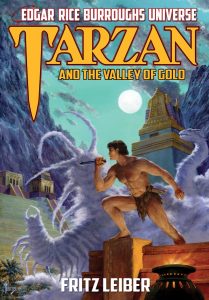 At long last, Tarzan and the Valley of Gold, Fritz Leiber’s classic novel of the Lord of the Jungle, is back in print—available for the first time in hardcover, and featuring brand-new cover art by Richard Hescox and interior art by Douglas Klauba! The book is now available to order from Amazon, Barnes & Noble, or directly from our online store.

A Tarzan Tale Unlike Any Other

The year 1966 saw the release of one of the most unique Tarzan films ever made: Tarzan and the Valley of Gold. Starring former NFL linebacker Mike Henry in his debut as the cinematic ape-man, the film portrayed a cultured and refined Tarzan who seemed to be molded more after James Bond than the unsophisticated ape-man of past films. The depiction surprised and puzzled some moviegoers, but fans who had read the original Tarzan novels written by Edgar Rice Burroughs rejoiced at finally seeing their beloved character appear on the big screen bearing all the complexity and intelligence with which his creator had imbued him.

Enter critically acclaimed fantasy author Fritz Leiber, whose novelization of the film carried the honor of becoming the first authorized Tarzan novel to be written by an author other than Burroughs. Leiber’s tale was far from just a simple retelling of the movie; it was a faithful installment in the literary saga of the ape-man, with frequent callouts to Burroughs’ original Tarzan canon and myriad creative elements added to the storyline. Now readers can once again enjoy Fritz Leiber’s classic Tarzan and the Valley of Gold in this handsome, new illustrated edition, with an all-new foreword by Burroughs scholar Scott Tracy Griffin (author of Tarzan on Film).

The Valley of Gold…and Death 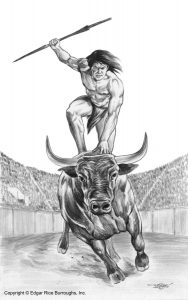 The burning wreck of a passenger jet with a missing cargo of gold and a desperate plea from a friend lead Tarzan of the Apes deep into intrigue in the jungles of Brazil. Soon the ape-man finds himself facing his most deadly nemesis yet: a criminal mastermind named Vinaro, whose enemies perish in mysterious explosions of gold and flame. But that may be only the beginning of Tarzan’s challenges. For if he is to defeat Vinaro, Tarzan must confront him in the legendary golden city of Tucumai, from where no outsider has ever returned.

A renowned and award-winning author of science fiction, fantasy, and horror, Fritz Leiber (1910–1992) is best known for his Fafhrd and the Gray Mouser fantasy series. He is credited with coining the term sword and sorcery and is widely considered one of the genre’s founders. A SFWA Grand Master and winner of six Hugo Awards, three Nebula Awards, and two World Fantasy Awards, Leiber stands as a giant in the field of fantastic literature. 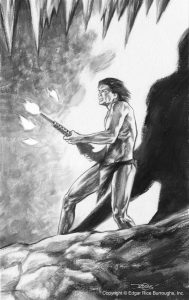 Richard Hescox is one of the founding lights of the Imaginative Realism movement. He has contributed artwork to such projects as the films E.T. and The Dark Crystal, as well as computer games, record albums, and magazine illustrations. He has also provided cover art and interior illustrations for hundreds of books, including the limited edition of A Clash of Kings from the George R. R. Martin’s bestselling Game of Thrones series. Richard previously painted the iconic cover art for all five books of Edgar Rice Burroughs’ Carson of Venus series.

An award-winning illustrator, Douglas Klauba was born and raised in Chicago, and is a graduate of the American Academy of Art. His paintings have been included in the art annuals of Spectrum: The Best in Contemporary Fantastic Art, the Society of Illustrators, and Imagine FX magazine. He was Artist Guest of Honor at the 2016 Burroughs Bibliophiles Dum-Dum convention, and he previously provided artwork for the books Tarzan Trilogy and Untamed Pellucidar published by Edgar Rice Burroughs, Inc.

Don’t miss out on this first, fully illustrated hardcover edition from the press founded in 1931 by Edgar Rice Burroughs himself!

Order your copy today of Tarzan and the Valley of Gold from Amazon, Barnes & Noble, or directly from our online store.