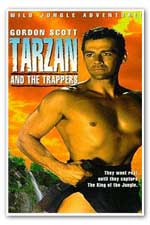 Tarzan and the Trappers

The idyllic jungle life of Tarzan (Gordon Scott), Jane (Eve Brent) and Tartu (Rickie Sorensen) is interrupted by a drum message telling them of predatory hunters loose in the jungle. Tarzan disrupts the animal-collecting expedition of the hunters, Schroeder (Lesley Bradley) and Rene (Maurice Marsac); he frees a baby elephant whose mother they have killed and then leads the elephant herd against them when they make hostages of Tartu and Cheeta the chimp. Afterwards he warns off two other hunters, Sikes (Saul Gorse) and Lapin (William Keene), seeking to plunder the lost city of Zarbo. He is attacked by their men, but escapes and shadows their party. Aware of Tarzan’s continued presence, the hunters capture his native friend Tyana (Sherman Crothers), and trap the ape man when he tries to free him. Tyana’s tribe rescues the two. Finally, the hunters reach Zarbo, but find it empty of both people and treasure. In a final conflict, Tarzan overcomes the villains, who are then turned over to the authorities by the natives.