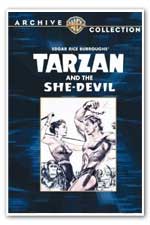 Tarzan and the She-Devil

Poachers enslave the men of the Lykopo tribe in order to force them to capture bull elephants for their ivory. Lyra, the employer of the poachers tries to have Jane kidnapped but her men fail and burn down Tarzan and Janeâ€™s tree house. Tarzan believes Jane died in the fire and becomes despondent. Lyra has her men capture Tarzan in an attempt to force him to help them herd the elephants. Jane was able to escape the fire and is captured while searching for Tarzan. Once Tarzan sees Jane is alive and well, he is relieved but now he must figure a way to save them both.