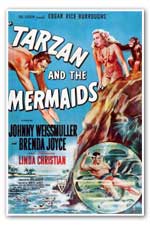 Tarzan and the Mermaids

Varga (Fernando Wagner), a villainous white pearl thief posing as the god Balu has chooses a lovely young native girl, Mara (Linda Christian) to be his bride. She escapes the island of Aquatania and meets Tarzan (Johnny Weissmuller) and Jane (Brenda Joyce) who agree to help her and she gives Jane a rare black pearl. She is recaptured, however, and taken back to the island. Tarzan goes to her rescue. Tiko (Gustavo Rojo) to whom Mara is betrothed meets Jane. Benji (John Laurenz), the singing mailman takes Jane’s pearl to the region’s commissioner, who decides to visit the island, picking up Jane and Tiko along the way. They are captured and Varga’s henchman, Palanth (George Zucco), in his role as high priest, is about to sentence them to death when Tarzan, disguised as Balu, arrives to have them released. Tiko and Mara are about to be married when the real Balu appears and all the outsiders are ordered to be thrown to their deaths into the sea. Tarzan unmasks the false god and the two villains meet the fate they had tried to impose upon the others.