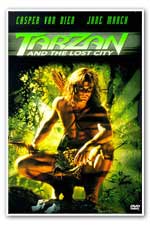 Tarzan and the Lost City

In 1913, on the night before Jane Porter’s wedding to John Clayton (also known as Tarzan), her bridegroom receives a disturbing vision of his childhood homeland in peril. Much to Jane’s distress, Clayton leaves for Africa to help. The educated explorer Nigel Ravens is seeking the legendary city of Opar, to plunder its ancient treasures. But then Jane decides to follow her fiancÃ©, and he must protect her while trying to stop Ravens and his men.