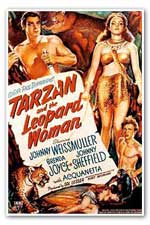 Tarzan and the Leopard Woman

Travellers near Zambezi are being killed, apparently by leopards. The commissioner (Dennis Hoey) asks Tarzan to look into the matter. Tarzan immediately doubts that leopards are the problem. At the same time, Tarzan, Jane, and Boy take in Kimba, a boy who claims to have become lost in the jungle. Kimba (Tommy Cook) is the brother of Queen Lea, leader of a leopard cult. She has dispatched him to spy on Tarzan. Queen Lea also conspires with Ameer Lazar (Edgar Barrier), a Western-educated doctor who resents the West’s domination of the area.

Kimba has a goal of his own: to take the heart of Jane (Brenda Joyce) a deed that would make him a warrior in the eyes of the cult. The Leopard Men wear leopard skins that form a cowl and cape, with iron claws attached to the back of each hand. Queen Lea (Acquanetta) wears a headband, wrist bands, ankle bands, halter top and miniskirt made of leopard skin. As “Variety” put it: “She displays plenty of what it takes to stir male interest and handles her acting chores adequately.” She works her followers into a frenzy in an underground chamber, “These skins are your disguise. These claws are your weapons. Go not as men, but as leopards. Go swiftly, silently.”

They attack a caravan bringing four teachers (Iris Flores, Lillian Molieri (Miss Central America of 1945), Helen Gerald and Kay Solinas) and bring the maidens back for sacrifice. They also capture Tarzan, Jane, and Boy. Tarzan brings down the roof of the cavern, destroying the cult and rescuing his friends.