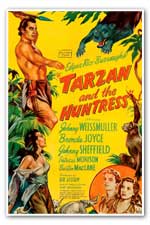 Tarzan and the Huntress

Due to a shortage of animals in American zoos following World War II, Tanya Rawlins, a big-game “huntress,” Carl Marley, her financial backer and Paul Weir, a cruel trail boss, are given permission by King Farrod, to capture a male and female of each species of animal on his land.

In a subplot, Oziri, nephew to King Farrod, colludes with Weir to allow him to trap more animals than bargained for. He also has Weir’s men kill King Farrod and his son, Prince Suli, in order for him to take over the throne. Farrod is shot in the back and killed, and Suli is thrown into a pit full of crocodiles, but, unknown to all watching, he lands on a hidden ledge and is knocked unconscious.

Boy trades two lion cubs to the trappers for a flashlight. When Tarzan finds out, he returns the flashlight, retrieves the cubs, and calls all the animals from King Farrod’s land across the river to his part of the jungle. When the hunters begin trapping on his side of the river, Tarzan and Boy sneak into their camp at night, take their guns and hide them in a cave behind a waterfall. They then begin to systematically release all the trapped animals from their cages.

Cheeta inadvertently reveals the location of the cache of weapons to Rawlins and her safari.

Prince Suli is able to make his way through the jungle, and is found by Tarzan. Tarzan, Boy and a herd of elephants defeat both the usurping nephew and the huntress, but the latter escapes onboard a plane.