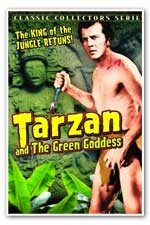 Tarzan and the Green Goddess

At his English manor, Lord Greystoke – aka Tarzan – recounts his recent adventures in Guatemala. He had been there assisting Major Martling and Ula Vale in their quest for the Green Goddess, a totem worshipped by a primitive jungle tribe inside of which was hidden a formula for a super-explosive. They had successfully wrestled this totem from the natives and were heading back to Livingston when they were attacked by Raglan, a thug sent to steal the Green Goddess and its formula for Hiram Powers’ personal use, and the Goddess is seized from them. On the trail of Raglan, they had to deal with his henchmen and also a party of the primitives, sent by the High Priest to retrieve the Goddess. With the Goddess still in Raglan’s hands, they were seized by the natives and Tarzan locked in a small cell with a loosely-tethered lion, Ula in an adjacent cell under guard from a hideous jungle hag, and Martling being forced to watch his bumbling valet.