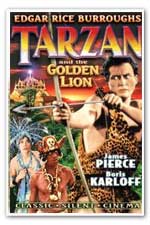 While Tarzan is away from Greystoke, John Gordon (Weesimbo) manages to take refuge at Lord Greystokeâ€™s estate and tells everyone at Greystoke the story of how he was held captive in the Temple of Diamonds by the Tangani tribe. Flora Hawkes and her Aunt Jane arrive in time to hear the story Weesimbo is telling. News of the diamonds travels to the chief of a band of thieves, Esteban Miranda, who is able to intrude onto the Greystoke estate pretending to be Tarzan. He and his band capture Weesimbo and Flora and force Weesimbo to take them to the diamonds. The evil high priest at the Temple of Diamonds captures Flora intending to sacrifice her to Numa, the lion god of the Tangani. Once Tarzan hears what has happened he and Jad-bal-ja fight their way to the Temple of Diamonds along with a band of Wiziri warriors to an exciting conclusion.