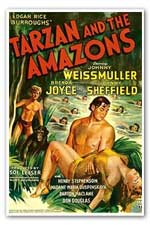 Tarzan And the Amazons

Tarzan and Boy, on their way to meet Jane, who is returning from nursing work in England to support the war effort, rescue an “Amazon” woman from an attack by a black panther. During the attack, she drops a golden bracelet which Cheeta picks up. The Amazon woman’s ankle is twisted in the incident and she cannot walk. Telling Boy to wait for him, Tarzan carries the woman through a mountain pass to the valley where her city of Palmyria is located. Boy disobeys Tarzan, follows them at a distance, and discovers the location of the city, then returns to wait for Tarzan.

After they reunite with Jane, a group of explorers, led by Sir Guy Henderson, discover the bracelet Cheeta has, and its markings are matched to other relics supposedly from a lost city of Amazons. The explorers attempt to enlist Tarzan to lead them to Palmyria. Tarzan refuses, but Boy, believing he is aiding the advancement of science, is duped into guiding them there.

Boy and the party are captured by the Amazons, and their queen declares that in lieu of the death penalty for invading their city, they will all be forced to work the rest of their lives in the Palmyrian quarries with the other men they keep for labor. The woman Tarzan saved from the panther takes pity and releases them. The group, led by Ballister, Henderson’s unsavory second-in-command, and Anders, then sets about looting the city’s treasure vaults. When Henderson objects, Ballister kills him, then fatally knifes the woman who released them. She is able to sound an alarm before she dies, and the invaders are all killed save Ballister and Anders, who escape with two pieces of treasure.

Boy is recaptured and condemned to die. Cheeta warns Tarzan of Boy’s impending doom. Tarzan races to Palmyria, meets Ballister and Anders, and backs them into a mud bog in which they sink and die. He returns the Amazon’s treasure in exchange for Boy’s freedom.