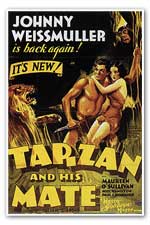 Tarzan and His Mate

The film begins with Tarzan and Jane Parker living in the Jungle. Henry Holt, with business partner Marlin Arlington, meet up with them on their way to take ivory from an elephant burial ground. Holt tries to convince Jane, who was with him on his first trip to the jungle, to return with him by bringing her gifts from civilization including clothing and modern gadgets but she tells them she’d rather stay with Tarzan.

Later, when Tarzan refuses to let the men take ivory from the burial ground he is shot by Arlington and left for dead. Jane, thinking Tarzan is dead, contemplates leaving the jungle. Meanwhile, Cheeta and his ape friends nurse Tarzan back to health in time for him to stop the men who shot him.