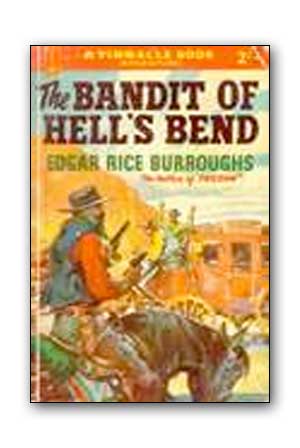 The Bandit of Hell’s Bend

The Bandit of Hell’s Bend (1925) was Edgar Rice Burroughs’ first novel about the West. It is an authentic picture of Arizona ranch life in the 1880’s, including a full gallery of colorful and often comic characters. The story centers around a young, attractive, intelligent orphan, Diana Henders. A Group of swindlers, led by her new foreman, Hal Colby, plot to steal her Bar-Y ranch and gold mine and defraud her out of her rightful inheritance. They are also out to prove that her longtime friend and associate, bull is the stage robbing and murdering bandit of Hell’s Bend. Diana is brave and independent, but she relies on Bull and he helps her survive a series of perils that leave the most stalwart reader breathless: Apache raids, stagecoach hold-ups, shoot-outs and even an abduction! But the identity of the mysterious villain remains unknown… A good deal of the novel’s authority and amiability consists in it’s accurate and pervasive use of frontier humor. The Bandit Of Hell’s Bend is full of fun, adventure, and suspense from start to finish.