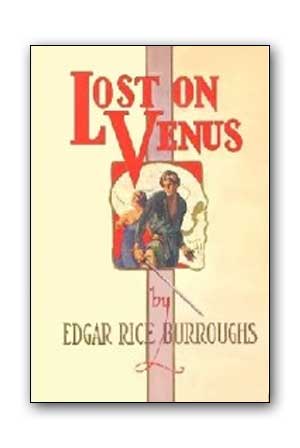 Life on Venus had not been easy for Earthman Carson Napier. All of his courage and cunning were needed just to stay alive on the world of deadly monsters and even deadlier men. But Carson was determined to do more than survive. He had sworn to deliver the princess Duare to her treetop kingdom of Vepaja – even though a thousand miles of unmapped territory lay between him and his lofty goal. From the treacherous Room of the Seven Doors to the horror of Kormor, City of the Dead, attacked by the beast-men and imprisoned by the ruthless scientists, the reluctant hero battled his way across a world of unimaginable perils – for the beautiful princess Carson had pledged to serve was also the women he loved…

PRINCESS OF VENUS — She was the most beautiful women on Venus: Duare the last hope of Vepaja , daughter of its king. Now she was gone, a captive of the terrible Thorists, the sworn enemies of her people. No man born of Venus had the strength and cunning to rescue her:only Carson Napier, a man of Earth whose crashed ship had marooned on the mist-shrouded planet. For the sake of her life, and the hope of her love,he was willing to undergo the horror of the room of the Seven Doors, to walk in the City of the Dead: to face the thousand. deadly perils that spelled glorious adventure – Lost on Venus or death – for him and his beloved princess.