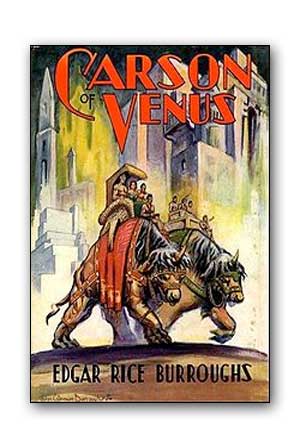 On the mist-shrouded planet of Venus, advanced civilizations blessed with eternal youth co-existed with cities haunted by the living dead, while bloodthirsty man-beasts stalked the luminous nights. Earth man Carson Napier knew how to survive the planet’s many perils-but now a merciless tribunal had condemned Carson’s beloved princess Duare to death. To save her life, the courageous Earth man stole the only airplane on Venus. But on the lovers’ flight to freedom, they learned that Duare’s father had been captured by a mad dictator.

Across uncharted oceans teeming with fierce sea monsters , and through skies where man had never flown before, Carson of Venus risked his life to thwart an evil tyrant’s plan…