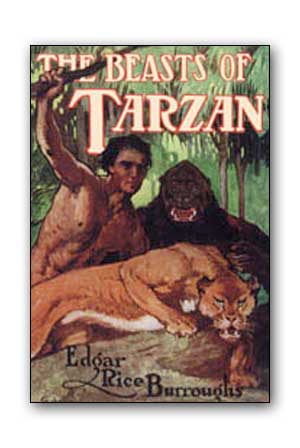 Not long after Tarzan claims his hereditary title of Lord Greystoke and marries Jane, their infant son, Jack, is kidnapped in London by his old Russian enemies, Nikolas Rokoff and Alexis Paulvitch. Following an anonymous call about the whereabouts of Jack, Tarzan himself falls into Rokoff’s trap and is imprisoned aboard a ship carrying Jack. Jane, fearing Tarzan was entering a trap, follows him and also finds herself in Rokoff’s clutches aboard the boat. Rokoff sets sail to Africa, eventually exiling Tarzan on an island near the African coast and telling Tarzan that Jack will be left with a cannibal tribe and raised as one of their own.

Using his jungle skill and primal intelligence, Tarzan wins the help of Sheeta, the vicious panther, a tribe of great apes led by the intelligent Akut, and the native warrior Mugambi. With their aid, Tarzan reaches the mainland, kills Rokoff, and tracks down his wife and son. Paulvitch, the other villain, is presumed dead, but manages to escape into the jungle.