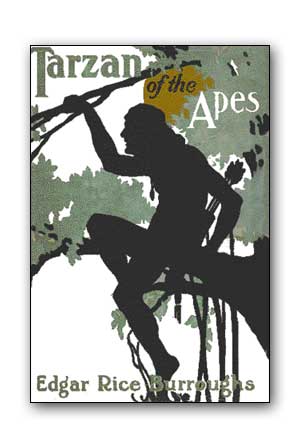 The novel tells the story of John Clayton, born in the western coastal jungles of equatorial Africa to a marooned couple from England, John and Alice (Rutherford) Clayton, Lord and Lady Greystoke. Adopted as an infant by the she-ape Kala after his parents died (his father is killed by the savage king ape Kerchak), Clayton is named “Tarzan” (“White Skin” in the ape language) and raised in ignorance of his human heritage.

Feeling alienated from his peers due to their physical differences, he discovers his true parents’ cabin, where he first learns of others like himself in their books, with which he eventually teaches himself to read.

On his return from one visit to the cabin, he is attacked by a huge gorilla which he manages to kill with his father’s knife, although he is terribly wounded in the struggle. As he grows up, Tarzan becomes a skilled hunter, gradually arousing the jealousy of Kerchak, the ape leader.

Later, a tribe of black Africans settles in the area, and Kala is killed by one of its hunters. Avenging himself on the killer, Tarzan begins an antagonistic relationship with the tribe, raiding its village for weapons and practicing cruel pranks on them. They, in turn, regard him as an evil spirit and attempt to placate him.

The twelve short stories Burroughs wrote later and collected as Jungle Tales of Tarzan occur in the period immediately following the arrival of the natives, the killing of Kala, and Tarzan’s vengeance. Finally Tarzan has amassed so much credit among the apes of the tribe that the envious Kerchak at last attacks him. In the ensuing battle Tarzan kills Kerchak and takes his place as “king” of the apes. Subsequently, a new party of whites is marooned on the coast, including Jane Porter, the first white woman Tarzan has ever seen. Tarzan’s cousin, William Cecil Clayton, unwitting usurper of the ape man’s ancestral English estate, is also among the party. Tarzan spies on the newcomers, aids them, and saves Jane from the perils of the jungle. Absent when they are rescued, he is introduced further into the mysteries of civilization by French Naval Officer Paul D’Arnot, whom he saves from the natives. D’Arnot teaches Tarzan French and how to behave among white men, as well as serving as his guide to the nearest colonial outposts.

Ultimately, Tarzan travels to Jane’s native Baltimore, Maryland only to find that she is now in the woods of Wisconsin. Tarzan finally meets Jane in Wisconsin where they renew their acquaintance and he learns the bitter news that she has become engaged to William Clayton. Meanwhile, clues from his parents’ cabin have enabled D’Arnot to prove Tarzan’s true identity. Instead of claiming his inheritance, Tarzan chooses rather to conceal and renounce his heritage for the sake of Jane’s happiness.