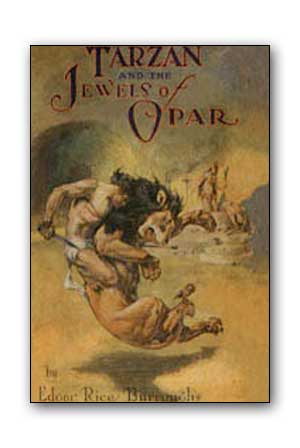 Tarzan and the Jewels of Opar

In the previous novel Tarzan and Jane’s son, Jack Clayton, a.k.a. Korak, had come into his own. In this novel Tarzan returns to Opar, the source of the gold where a lost colony of fabled Atlantis is located, in order to make good on some financial reverses he has recently suffered. While Atlantis itself sank beneath the waves thousands of years ago, the workers of Opar continued to mine all of the gold, which means there is a rather huge stockpile but which is now lost to the memory of the Oparians and only Tarzan knows its secret location. A greedy, outlawed Belgian army officer in the employ of a criminal Arab secretly follows Tarzan to Opar. There, John Clayton loses his memory after being struck on the head by a falling rock in the treasure room during an earthquake. On encountering La, the high priestess who is the servant of the Flaming god of Opar, and who is also very beautiful, Tarzan once again rejects her love which enrages her and she tries to have Tarzan killed; she had fallen in love with the ape man during their first encounter and La and her high priests are not going to allow Tarzan to escape their sacrificial knives this time. In the meanwhile, Jane has been kidnapped by the Arab and wonders what is keeping her husband from once again coming to her rescue. A now amnesiac Tarzan and the Belgian escape from Opar, bearing away the sacrificial knife of Opar which La and some retainers set out to recover. There is intrigue and counter intrigue the rest of the way.