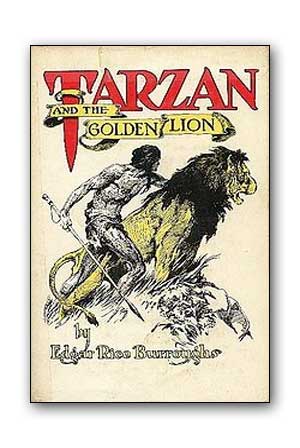 In the previous novel, Tarzan rescued Jane after he discovered that she was alive, and was reunited with his son Korak. In this story he and his family encounter and adopt an orphaned lion cub, whom they name Jad-bal-ja (“The Golden Lion” in the language of the lost land of Pal-ul-don, which they have recently left). They then return to their African estate, gutted by the Germans during the course of World War I in Tarzan the Untamed. They find it already being rebuilt by Tarzan’s faithful Waziri warriors, including old Muviro, who first appears in this novel after a previous mention in Tarzan the Untamed. Muviro reappears in a number of later novels as sub-chief of the Waziri. Back at home, Tarzan raises Jad-bal-ja, who in adulthood is a magnificent black-maned golden lion devoted to the Ape Man. Later Tarzan is drugged and delivered to the priests of Opar, the lost colony of Atlantis that he had last visited in Tarzan and the Jewels of Opar. Once again La, the High Priestess of the Flaming God, who is consumed by her hopeless infatuation with Tarzan, rescues him. But when her people discover that she had betrayed them, she flees with Tarzan into the legendary Valley of Diamonds, where savage gorillas rule. The good news is that Tarzan and La are followed by the faithful Jad-bal-ja. The bad news is that they are also being trailed by Esteban Miranda, who happens to look exactly like Tarzan, who hopes to locate and loot Opar.