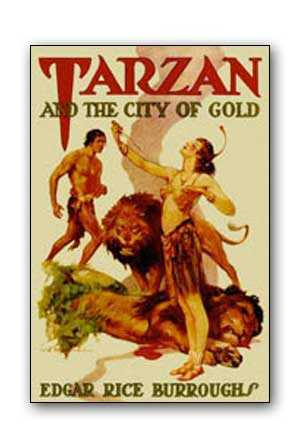 Tarzan and the City of Gold

After encountering and befriending Valthor, a warrior of the lost city of Athne (whom he rescues from a group of bandits known as shiftas), the City of Ivory and capital of the land of Thenar, Tarzan is captured by the insane yet beautiful queen Nemone of its hereditary enemy, Cathne, the City of Gold, capital of the land of Onthar. This novel is perhaps best known for two scenes; in the first, Tarzan is forced to fight Cathne’s strongest man in its arena. While an ordinary man might have been in trouble, Tarzan easily overpowers his antagonist. The second scene, in which Tarzan is forced to fight a lion, starts with the ape man being forced to run away from a hunting lion, Belthar, which will hunt him down and kill him. Tarzan at first believes he can outrun the beast (lions tire after the first 100 yards at top speed). This lion, however, is of a breed specifically selected for endurance, and ultimately Tarzan must turn to face him, though aware that without a knife he can do little but delay the inevitable. Fortunately his own lion ally, Jad-bal-ja, whom he had raised from a cub, arrives and intervenes, killing Belthar and saving Tarzan. Nemone, who believes her life is linked to that of her pet, kills herself when it dies. Unusually for lost cities in the Tarzan series, which are typically visited but once, Cathne and Athne reappear in a later Tarzan adventure, Tarzan the Magnificent. (The only other lost city Tarzan visits more than once is Opar.)