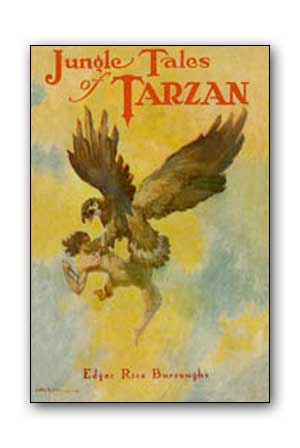 Tarzan’s First Love. Tarzan’s courtship of the female ape Teeka ends in failure when her preference turns to their mutual friend, the male ape Taug. The Capture of Tarzan. Tarzan is taken captive by the warriors of a village of cannibals which has established a village near the territory of the ape tribe. He is saved from them by Tantor, the elephant. The Fight for the Balu. Teeka and Taug have a baby (balu, in the ape language), which Teeka names Gazan and will not allow Tarzan near. She changes her mind after Tarzan saves the baby from another ape. The God of Tarzan. Tarzan discovers the concept of “God” in the books preserved in the cabin of his dead parents, to which he pays regular visits. He inquires among members of his ape tribe for further elucidation without success, and continues his investigation among the cannibals of the nearby village and the natural phenomena of his world, such as the sun and moon. Eventually he concludes that God is none of these, but the creative force permeating everything. Somehow, though, the dreaded snake Histah falls outside this. Tarzan and the Black Boy. Jealous of Taug and Teeka’s relationship with their baby, Tarzan kidnaps Tibo, a little boy from the neighboring village to be his own “balu.” He tries with indifferent success to teach the terrified and homesick child ape ways. Meanwhile, Momaya, Tibo’s mother does everything she can think of to find and recover her son, even visiting the hermit witch-doctor Bukawai, a terrible, diseased exile who keeps two fearsome hyenas as pets. He names a price for recovering Tibo she cannot afford, and she leaves disappointed. Afterwards, however, Tarzan, who is moved by Tibo’s distress and his mother’s love, returns the boy to her.

The Witch-Doctor Seeks Vengeance. Bukawai attempts to claim credit for Tibo’s return and extort payment from the boy’s mother, but is rebuffed. He plots vengeance against the native family and Tarzan, but is thwarted by the ape man.

The End of Bukawai. Bukawai, finding Tarzan unconscious after a storm, takes the ape man captive and stakes him out for his hyenas to devour. Escaping, Tarzan leaves the witch doctor in the same trap, in which Bukawai suffers the very fate he had intended for his enemy.

The Lion. Tarzan vainly attempts to impress on his ape tribe the necessity of maintaining a strict watch against the hazards and perils surrounding them. To drive home the lesson, he dons the skin of a lion he has killed and suddenly appears among them, only to find them more vigilant than he had thought, as they mob him and nearly beat him to death. He is saved only by the courage of his monkey friend Manu, which he had also previously under-rated, who risks all to reveal to Teeka and Taug that the “lion” is actually Tarzan. The Nightmare. Having been unsuccessful hunting, Tarzan robs the native village of some rotten elephant meat, which he eats. Becoming ill from the tainted meal, he has a horrible nightmare, in which he dreams himself menaced by a huge snake with the head of the village’s witch doctor and is carried off by a giant bird. Waking, he realizes the incidents were not real. Subsequently attacked by a gorilla, he assumes that this too is a product of his fevered imagination, until actually wounded and hurt. He kills the beast, but is left to wonder what is real and what is fantasy. The only thing he is certain of is that he will never again eat the meat of an elephant.

The Battle for Teeka. Discovering bullet cartridges in his deceased father’s cabin, Tarzan takes them with him as curios. Subsequently, Teeka is taken by an ape from another tribe, and Tarzan and Taug join forces to trail the kidnapper and rescue her. When they catch up they are surrounded by the enemy tribe and nearly overwhelmed, until Teeka starts the cartridges at their foes in an apparently futile effort to help. When some of them hit a rock, they explode, frightening the hostile apes and saving her “rescuers.” A Jungle Joke. As part of his campaign of torment and trickery against the native village, whose members he holds responsible for his ape foster mother’s death, Tarzan captures Rabba Kega, the local witch doctor, and puts him in a trap the natives have set to catch a lion. The next day the warriors find they have caught the lion, but it has killed the witch doctor. They take the lion to the village. Tarzan secretly releases it and appears among them dressed in the lion skin he had previously used to trick the apes. Dropping the disguise, he reveals himself and leaves. When the natives muster enough courage, they follow, only to encounter the real lion, which they assume is Tarzan in his disguise again. They are quickly disabused. Tarzan Rescues the Moon. Tarzan frees a native warrior the apes have caught on being impressed by the man’s bravery, angering the rest of the ape tribe. Alienated, he exiles himself to his parents’ cabin. Later, frightened by an eclipse in which darkness appears to devour the moon, they summon him back. Tarzan reassures them by shooting arrows at the “devourer,” and as the eclipse passes is given credit by the creatures for the “rescue.”

According to Tarzan Alive, Philip Jose Farmer’s study of the ape man’s life and career, the incidents of this book occurred from February, 1907-August, 1908 (aside from the eclipse incident, there apparently having been no such eclipse visible from equatorial Africa during this period).[3]